Rihanna. She’s the Bajan beauty who shimmied onto the scene and into our hearts in 2005 with her debut single, “Pon de Replay.”

Fast forward 12 years. She’s still relevant and serves as an inspiration to people around the world. It’s hard to believe that during a 2015 interview when asked if she would be one of the celebrities joining Taylor Swift on her 1989 world tour, she said no. Her reasoning? She explained, “In my mind [Taylor Swift] is a role model, I’m completely not”. Well I hate to break it to you Rihanna, but in my eyes you’re the ultimate role model.

Here are some of the most noteworthy lessons Bad Gal RiRi has taught us over the years.

You Can Make the World a Better Place to Live

You don’t have to give your everything—just give what you can. In Rihanna’s Harvard Humanitarian of the Year Award acceptance speech she said, “If you’ve got a dollar, there’s plenty to share.” In other words, you don’t have to make a grand gesture or give all of yourself in order to make someone else’s life happier or easier.

Philanthropy has always been important to Rihanna. At the age of five she started thinking about how she could give back, and twenty-four years later she’s sill trying to find ways to improve the lives of others.

When she was eighteen she founded The Believe Foundation to give children with terminal illnesses access to treatment, school supplies, toys, and clothes so they would have a better shot at survival. Ultimately, her hope was that with help, the children would later be able to go out into the world and thrive. She has also raised public awareness for HIV/AIDS, as well as raised money for cancer research. In 2012, she founded the Clara Lionel Foundation, a scholarship program that sends students from the Carribbean to college.

More recently, she was named an ambassador for the Global Partnership for Education and Global Citizen Project. In this role. she strives to ensure that children in poor countries will be given a quality education that sets them up for opportunities in the future. Since taking on this role, she has been rallying world leaders and asking them to commit to improving education in their respective countries.

“I always believed that when you follow your heart or your gut, when you really follow the things that feel great to you, you can never lose, because settling is the worst feeling in the world.” -Rihanna 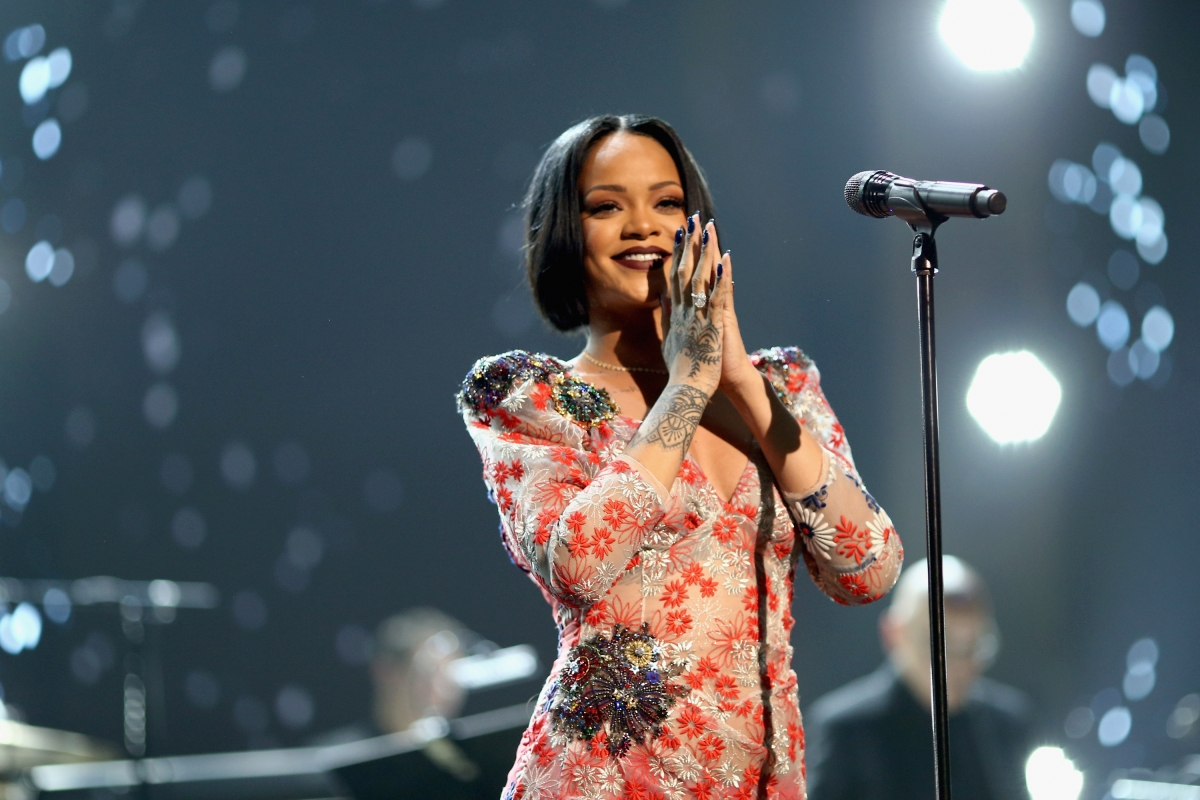 If you’re passionate about something—pursue it. Don’t settle for something that you don’t love because of others’ expectations. Like RiRi said, “Nothing in life comes easily. Everything comes with sacrifice.” Sometimes you must give up the good, and get out of your comfort zone before you can achieve greatness.

RiRi always knew that her future was singing. As she once said, “Music is in my DNA.” She grew up singing whenever she could, and eventually she landed an audition with a music producer. She blew him away, and at the age of sixteen she made the choice to step out of her comfort zone, and leave everything she knew behind in order to move to the U.S. and start her career. Once she got to America, she had to hustle everyday to become the star she is today. She persisted because she knew that she wanted to put music into the world that people would appreciate. In 2005, Jay-Z signed her to Def Jam Records and a couple months later she dropped “Pon de Replay,” which put her on the map.

Fashion Should be Fun

Style should show your individuality. You don’t have to conform and wear what everyone else is wearing, and you don’t have to be constricted by the standards of a certain aesthetic. You don’t even have to have the same aesthetic everyday. You want to be a “boho beauty” on Tuesday and an “Instagram baddie” on Wednesday? Do it.

Be courageous. If you can make it work for you, then go out into the world and rock it. Fashion should be fun and empowering. The right outfit can also deflect negativity; wearing something that expresses who you are can be empowering, and give you the confidence to do you, even if it’s not on trend. Do you want to wear a velour track suit and heels, or head to toe camo? Feel like rocking a jacket that’s way too big for you or want to ditch your bra? DO IT.

Rihanna won the Style Icon Award and the 2014 CFDA Award Show—and for good reason. She is never afraid to take fashion risks and usually her looks turn into trends. She goes big and is never afraid to show out—and she’s hailed as a fashion icon because of it. Whether she’s at Fashion Week, gracing the red carpet, or out shopping, she serves timeless looks.

However, even as one of the most fashionable women in Hollywood, she knows she’s going to take an L every once in awhile. As the wise Queen once said, “Sometimes I’ll wear something and think, I’m going to get so much flack for this tomorrow, but if I want to wear it, I will. If I dress too sexy, then I’m a slut; if I dress sophisticated, then I’m a grandma. At the end of the day, I just wear what I want to wear.” Ultimately, remember that it’s your life, and you can do as you please.

“When you realize who you live for, and who’s important to please, a lot of people will actually start living. I am never going to get caught up in that. I’m gonna look back on my life and say that I enjoyed it-and I lived if for me.” -Rhianna

People will always have opinions, and sometimes they might hurt you. It’s important to remember that not every opinion matters, and you have no obligation to fit into anyone’s little box. There will always be judgmental people that feel the need to comment on your weight, what you’re wearing, your relationship, your grades or any other perceived flaw.

Taking care of yourself first is SO important. That means prioritizing your mental and physical health.   You need to accept that you’re just as important as the people you want to help, and you deserve to be taken care of too. You can’t expect yourself to be of any help to your loved ones if you don’t care for yourself first.

Rihanna has always been subject to harsh criticisms. Growing up, her peers would bully her for her light complexion, however she grew a tough skin because of it. You might think that’s behind her now, but ever since she’s  achieved superstardom people have criticized her for her “bad bitch” persona, her response to being assaulted, her relationships (or lack thereof), her body, her sex-positive attitude, and much more. Not to worry though, Ri knows her worth and she’s not one to lie down and let people come for her. She always comes in clutch with a killer clap back that leaves her haters laying in chalk.

Most recently, Rihanna was under fire for her apparent weight gain. A lot of her “fans” even went so far as to say they hoped she was pregnant because they weren’t okay with a “fat” Rihanna, and they didn’t want her to make being fat “on trend.” Ri clapped back with a well-timed video and a Gucci Mane meme to show that she remained unbothered. She’s content with herself and doesn’t have time to entertain people who feel strong pulling punches from the other side of a screen. When it comes down to it Ri says, “I respect what other people have to say. The bottom line is that everyone thinks differently. It’s very hard for me to accept, but I get it. People end up wasting their time on the blogs or whatever, ranting away, and that’s alright. I don’t hate them for it. Because tomorrow I’m still going to be the same person. I’m still going to do what I want to do.”

“When a door closes, you have two choices: give up or keep going.” -Rihanna

For years, people with very light or very dark skin have struggled to find their skin tone in the makeup available to them. Often times, they didn’t see a representation of themselves in the products or ad campaigns. Rihanna’s inclusive brand is doing the most to let people of all shades explore and play with makeup like they’ve never been able to before. The brand also goes a long way to showcase the beauty of women of many different races, ethnicities and skin tones.

There is More Than One Way to be a Feminist

“I think women want freedom, they want to be empowered, the want hope, they want love, they want all the things that I want and I’m not afraid to say those things and act on them and I think that’s why they identify with me.” -Rihanna

A feminist in simple terms is a person who believes in the social, political, and economic equality of sexes. Feminism gets a bad rap because many people think modern feminism is anti-male or unnecessary. Well, feminism is a lot of things, but it isn’t man hating or irrelevant.

We need feminism today because the wage gap is a glaring issue, men are targeted if they are perceived to be to feminine or emotional (toxic masculinity much?), women are judged if they aren’t feminine enough, or if they don’t marry and have kids.  We “mommy-shame” women who dare to have a family and a career, and sexism still exists within the work place. The list could continue, but the most important thing to know is that feminism brings awareness to serious societal issues so we can address them, and hopefully create change.

A lot of people over the years have called Rihanna anti-feminist, which in my eyes is a false accusation because she’s done so much, even if she isn’t as vocal as other celebrities. She’s shown that she wants equality among the genders and classes by rallying world leaders and citizens to fight for educational reform for all children, especially in poor countries. She’s shown that she wants equality throughout various intersections. She has used her platform to call out race issues, and she has also been vocal about LGBTQIA+ rights and is a vocal straight ally. She shuts down body-shamers, and is a huge advocate for women owning their bodies and being sex positive. Not to mention, she uses her brand to inspire and encourage women to be the purest form of themselves, and she supports women and their goals, instead of seeing them as competition. The best thing about Ri is she lives the change she wants to see.

“Success for me isn’t a destination. It’s a journey. Everybody’s working to get to the top but where is the top? It’s all about working harder and getting better and moving up and up.” -Rihanna

There is still a stigma surrounding women in business and STEM fields. Diversity is key to creating a strong team, and including women can give new perspectives and help increase productivity. Women in business can also lead to a more dynamic and unified working environment.

Ri is beauty and brains. In addition to her Fenty beauty line, she has collaborated with designer shoe companies and released jewelry collections. One of her most recent collaborations was “Fenty x Puma.” She was the creative director and revamped school uniforms to create a couture line of shoes, tops, bottoms, outerwear, and bags. Rihanna takes on projects she’s passionate about and learns from her past mistakes, which has helped her build her empire.

Rihanna is the Queen of our generation. She has given us so much and inspires us to be our best selves and pursue our goals fearlessly. Thanks RiRi.

Scroll back to top